The Thunder continue their marathon with tonight's game against the Orlando Magic. It should definitely be a tough test for Oklahoma City, as the Orlando Magic are one of the better teams from the East and probably the best in their division. They'll bring a tad of starpower tonight, with Dwight Howard, Rashard Lewis, Jameer Nelson, and last years most improved player Hedo Turkoglu. OKC, on the other hand, will have little to no star power tonight, as Kevin Durant will be a game time decision. Without KD, who's got the best name recognition? Joe Smith? Oh well, names don't win championships. It takes teamwork, defense, and talent. Oh wait, we don't have any of that either...

Backstory: What do the Thunder and Coke cans have in common. The both are crushed under pressure. OKC couldn't keep a lead to save their lives. Fortunately, they shouldn't have to worry about that tonight, because Orlando is far superior, especially without KD. Last I checked, all Orlando starters are averaging over 10 points per game, while the Thunder have yet to find someone to consistently drop over 10, aside from Jeff Green and the Great Longhorned One.

With or without KD, it makes no difference. Aside from last nights insanely good performance, Kevin Durant as been throwing bricks like they were made of tacks. It'll defintiely take some MAGIC, for the Thunder to win tonight (ok, that was bad, I know).

Match-Ups:
Earl Watson vs. Jameer Nelson
Edge: Nelson
I loved this guy back at St. Joe's, and was secretly cheering for him in the Elite 8 while they were playing OSU (I say secretly because my brothers a Cowboy fan). The Hawks dropped that game, but there's no way Jameer loses this one. His assist number are down somewhat, but hey, who doesn't beat Watson?

Kevin Durant? vs. Mickeal Pietrus
Edge: Durant
Well, if he plays, he has the edge. If he doesn't, and Russ Westbrook or Desmond Mason gets the start, Pietrus should handle them defensively and get the edge.

Jeff Green vs. Hedo Turkoglu
Edge: the Turk
He's got such a versatile game. Height, shooting, driving, rebounding. Jeff Green will give him a game, but Turkoglu gets the definite advantage.

Nick Collison vs. Rashard Lewis
Edge: Lewis
Rashard plays all over the court, so he shouldn't be in the power forward slot for too long. Dito everything I said praising Hedo for Rashard, except moreso.

Johan Petro vs. Dwight Howard
Edge: Howard
Let's see...the best center in the NBA or the lowest scoring Thunder starter? I'm noticing a trend of mismatches at this position. Note to Sam Presti: GET A CENTER WHO'S AS TALENTED AS HE IS TALL FOR ONCE!

Battle of the Benches
Edge: Magic
I'll say Orlando. The Thunder have the best bench player of the bunch, but nobody else is doing well. The Magic don't rely on their bench very much, but at least it isn't full of flops like OKC.

Coaching and Intangibles
Edge: Magic
Despite a crowd that's sure to be pumped for the game, Stan Van Gundy is a better coach and the Thunder have no momentum going into the game.

Player to Watch: No KD, eh? Here's a stretch, how about Robert Swift for tonight's player to watch. When facing a player like Dwight Howard, I'm sure P.J. will look to get a center more physical than Petro on the floor. 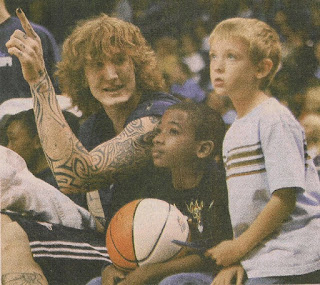 Made since the launch of his ASICS GEL-KINSEI 2 campaign by Japan in 2007, marks Onitsuku Tiger trainer has a series of ASICS GEL-Nimbus 9 shoe sculptures created, each of which Onitsuka Tiger Mexico 66 different aspects of Japanese culture.True to its tradition, Tansu carpentry, sculpture contains a series of boxes and drawers made of wood Onitsuka Tiger Ultimate 81 carved.

This is a great article, supplies the useful information for me, thanks in this
pressure relief valve|forged Steel valve|butterfly valves|dustbin

The such good thing, I have collected, joins the bookmark momentarily to visit, hoped that also has good thing
Chicken dog treats

Cool. Talking about makes sense. Is recognized. Hope that it will often share such a good text. I will always be concerned about, because you can learn some knowledge, thank you for sharing, and i love Gate Valve

HVAC technical schools in Arkansas provides the same opportunity for their students too.
HVAC Schools in OK