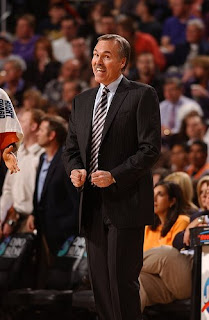 Mike D'Antoni: Creepiest Coach in All of Sports

And the slaughter continues....

The Thunder are going up against a team that has for the past 5 years been an NBA doormat. In the United States biggest television market and with a storied franchise history behind them, it would take a complete nutjob to screw them up. Those nutjobs are Jim Dolan and Isiah Thomas. Dolan is the owner, a traditional Daddys rich boy son ho knows absolutely nothing about running a basketball franchise. The latter, Thomas, is a former Point Guard who won the Pistons a Championship back in the 80s. The recipe for a good coach, right? Well, not when he goes to great lengths to trade for selfish point guards and lazy centers and can't coach them out of a closet. Luckily, he left the team at the end of last year, with the entire city of New York hating him and his players.

Enter Mike D'Antoni. He is the 04-05 Coach of the Year, and is largely attributed for the popularization of small ball. (Don Nelson invented it, but it never caught on until D'Antoni.) D'Antoni basically braught the Suns to national championship contenders every year. But, he always fell short, so Suns management saw a need to change things up. Thus, they traded Shawn Marion for Shaquille O'Neal, probably one of the worst moves ever. The suns were a first round out, and D'Antoni was quite unjustly fired by the power hungry GM, Steve Kerr. D'Antoni then got offers from the Bulls and Knicks. He took, to everyones surprise, the Knicks.

So, we come to today. The Knicks are a team full of lazy, selfish players that New York hates, and wants to get rid of, and everyone predicts them in the area of 20-25 wins. But....the D'Antoni magic struck. He benched Eddy Curry, who came to training camp having gained a lot of weight, and benched Stephon Marbury, a Point Guard known for hogging the ball and taking bad shots. Lo and behold, the Knicks are 5-3, and the City of New York is loving it.

Defensively, they'll have to keep it tight on the perimeter. Jamal Crawford and Quentin Richardson aren't afraid to throw it up if need be. At the same time, they have to keep aware of the inside scoring of Randolph and Lee. We shouldn't have too much of a problem with this aspect of it though, as we have a trememndous height advantage on them.

Basically, if you force them into bad shots on the perimeter, you should be good against this Knick team.

Match-Ups:
Earl Watson vs. Chris Duhon
Edge: Push
Chris Duhon is a good point guard in his own right, but he's spent his entire career behind Kirk Hinrich on Chicago until this season. At the same time, Earl Watson has played well lately, but can have off nights. It's really anybodys guess who comes out on top.

Kevin Durant? vs. Jamal Crawford
Edge: Durant
Both have equally bad shooting percentages, but Durant is far better defensively, and he can rebound and drive better.

Nick Collison vs. Zach Randolph
Edge: Zach Randolph
Zach Randolph had a bad year last year, but he appears to be picking things up. Finally out of his pot smoking jailblazer days, this guys is a scoring and rebounding force every night. Nick Collison is largely on and off.

Johan Petro vs. David Lee
Edge: David Lee
David Lee is an excellent rebounder, and Johan Petro is excellent at being completely average. David Lee was the diamond in the rough for the past couple of years for the Knicks, and I think he easily outmatches Trash-o.

Battle of the Benches
Edge: Thunder
Because of D'Antonis statements to some of the Knick players, their bench is very thin. The Thunders bench, on the other hand, is ready to replace any player in the starting lineup with someone slightly less crappy in a hearatbeat, and might as well go 12 men deep. D'Antoni would have to see all of the eligible players carried out on a stretcher before he played Curry or Marbury.

Coaching and Intangibles
Edge: Knicks
I'm not a fan of D'Antoni, but I've got to give him credit for the Knicks rebirth.

Player to Watch: Joe Smith. This veteran should have no problem trashing the big man midgets of New York.

I'm not qualified to do this, so I'll defer to my main man, Ben, for this last section.
God of Thunder's Pick: Knicks 95 Thunder 85
Posted by Marina at 3:26 PM

After going through this artical i have decided to bookmark this site found this really interesting & thanks a lot for keeping the blog Lively with such interesting blogs.
___________________
rozy
Online Marketing of your brand

Made since the launch of his ASICS GEL-KINSEI 2 campaign by Japan in 2007, marks Onitsuku Tiger trainer has a series of ASICS GEL-Nimbus 9 shoe sculptures created, each of which Onitsuka Tiger Mexico 66 different aspects of Japanese culture.True to its tradition, Tansu carpentry, sculpture contains a series of boxes and drawers made of wood Onitsuka Tiger Ultimate 81 carved.

I think you write very good article I agree with the views and ideas! Second, the article gave me the feeling is very large, so I learned a lot of knowledge. Very grateful to the author's share. I also like PU leather very much!

Hello, very professional high level of writing it! So many people to comment, let me also to comment on it. Because good writing, and I learned a lot, and I am glad to see such a beautiful thing. Thanks very much !the same time, i love disc dual check valve